Lucio Fontana, (Rosario de Santa Fè, 1899 – Varese, 1968). His father Luigi was a sculptor, his mother Lucia Bottino a theatre actress. When he was only seven years old, Fontana left Argentina and was entrusted to an uncle to study in Italy. He enrolled at the Building School in Milan but interrupted in ’16 to enlist as a volunteer, became an infantry second lieutenant and returned from the front in ’19, with a silver medal, wounded on the Karst. He then resumed his studies, graduated and went on to enroll in the sculpture course at the Brera Academy of Fine Arts in 1927. He was one of Adolfo Wildt’s favourite pupils. In 1930 Wildt was a member of the commission for the 17th Venice Biennale, the first in which Fontana participated.

During the 1930s, he studied and continued his research between two cities, Milan and Paris. During this period the artist began to separate his work from the school master Wildt. This shift is visible in the sculptural work Uomo Nero, exhibited at the Galleria il Milione in 1930. The statue is described as a ‘primitive thinker’ covered in a black, scratched tar casting. It is an artefact of a profound break with the 20th century, almost “the artist’s first sign of liberation”, as Edoardo Persico defined it. Uomo Nero was followed by the series of golds: Signorina seduta 1934 – Il Fiocinatore 1933-34 – Ritratto di Teresita 1939, where Wildtian echoes return at times.
It will be in the subsequent tablets, with the use of chalk combined with scratching, abstraction of matter on the one hand, Surrealist automatism on the other, that Fontana demonstrates his own wholly personal way of reading both.
Leggi tutto

This is what studying is for, not to repeat but to go further, and the genius moves our human experience, and, in this case, the artistic ones.
In ’41 he returned to Argentina where Fontana decided to teach, becoming a lecturer in plastic arts at the Academy of Buenos Aires. In ’46 he organized the Altamira, Escuela libre de artes plàsticas, with Jorge Rornero Brest and Jorge Larco, an important center of cultural dissemination. The Manifiesto Blanco was born in November through the contacts of young artists and intellectuals and from new research ideas, published in the form of a leaflet and written by Bernardo Arias, Horacio Cazenueve, Marcos Fridman, also signed by Pablo Arias, Rodolfo Burgos, Enrique Benito, César Bernal, Luis Coli, Alfredo Hansen and Jorge (Amelio) Rocamonte. It is a text that expressed the will to go beyond contemporary art and matter, overcoming the finiteness of current means of expression.
The term ‘Spatial Concept’ appears in ’46 in some of his drawings; this title is a world, his extraordinary vision. It is the artist’s personal invitation to look beyond, both in a symbolic and a physical sense, an invitation that will go along with much of his entire production. On 22 March 1947, Fontana returned to Italy, to Milan, where he met a group of young artists and, after meetings and discussions, wrote and signed the first Manifesto of Spatialism with the critic Giorgio Kaisserlian, the philosopher Beniamino Joppolo and the writer Milena Milani. From now on, Lucio Fontana’s artistic history is littered with masterpieces, insights, ideas and subversions of viewpoints.
Here some of the main steps of Lucio Fontana’s dense and committed life. At the end of 1958, his ‘Cuts’ took shape and were exhibited in February 1959 at the solo show at the Galleria del Naviglio and in March ’59 at the Stadler Gallery in Paris. During the same year at Documenta, Kassel, at the 5th São Paulo Biennial in Brazil, at the retrospective organized by Crispolti at the L’Attico Gallery in Rome, and in 1960 in Dusseldorf at the Galerie Schmela and in London at the solo show at Mc Roberts & Tunnard.
At the beginning of the 1960s he produced the Olii series, where the canvases are pierced or lacerated, with works dedicated to a re-evocation of the city of Venice. In ’61 he took part to his first US solo exhibition, at the Martha Jackson Gallery in New York.
Then he presented “Metalli”, mirrored sheets on which he intervened by tearing and cutting the surface.

Fontana Foundation, located in front of our gallery, at 23 Corso Monforte in Milan, in the same courtyard where the artist worked until 1968, recalled: “his unstoppable inventive streak is matched by the many exhibitions dedicated to him: in Milan, Venice, Tokyo, London, Brussels. On the iconographic renewal front, significant testimonies are the series of the ‘Fine di Dio’ (1963-1964), all oval-shaped canvases, monochrome or sometimes sprinkled with sequins, shot through with holes and lacerations, exhibited first at the Galleria dell’Ariete in Milan and later at the Iris Clert gallery in Paris”.

In the following years, just to mention the artist’s most important productions, he presented ‘Teatrini’ series (1964-1966) receiving a worldwide success. He had solo exhibitions at the Walker Art Center in Minneapolis, the Marlborough Gallery in New York and the Galerie Alexander Iolas in Paris.
At the XXXIII Venice Biennale, he created the oval labyrinthine environment with Carlo Scarpa, a work that won the Biennale prize.
In 1967, he created the series of ‘Ellissi’: elliptical planks of coloured lacquered wood pierced by machine-made holes. 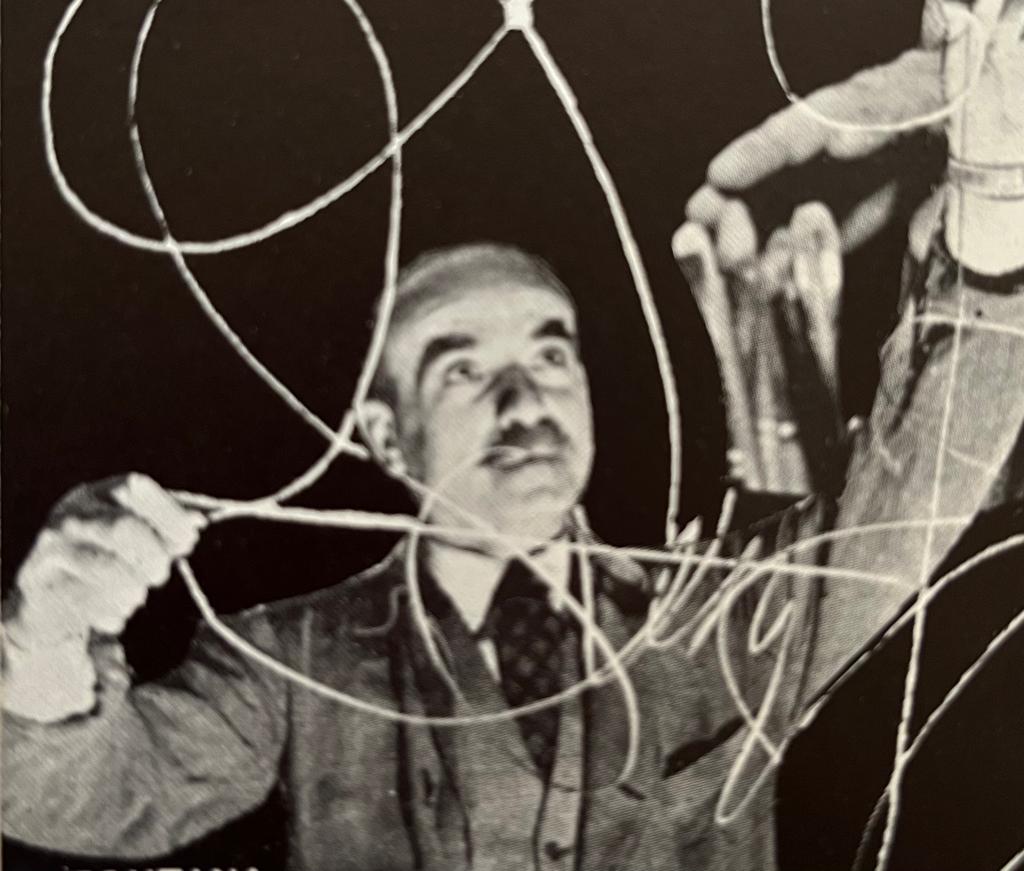